Last week my family and I had the pleasure of flying Alaska Airlines to Honolulu, Hawaii. It was my first time flying Alaska in first class on a flight longer the two hours, and my wife and daughters first flights on Alaska. We flew them from Oakland, California on their direct flight. They also offer connecting service via Portland, Seattle and most LA airports too. They may not offer as many flights per day as say Delta, American or United, but they most likely offer more destinations from more airports, since the big three really only offer service from their hubs in LA, SFO and  Seattle whereas Alaska offers service from almost all major West Coast cities. From the Bay Area Alaska flies to the four major islands in Hawaii (Oahu, Big Island, Maui and Kauai). We bought the tickets about six weeks ago using their Bank of America Visa buy one ticket get one for $99 plus tax.

We were flying on a 737-900, the largest plane they have and in our case it seemed like a pretty new one. This model has four rows of first class in a 2-2 configuration and 141 seats in a 3-3 layout in coach. It also offered Wi-Fi, although not available outside of the lower 48 and parts of Alaska. Additionally instead of overhead videos they offer digital players, preloaded with about 25 movies, TV shows and other entertainment. In first they are free and in coach they charge for them. They are only available on flights over 3 ½ hours or longer, so we lucked out on out 4 ½ hour trip. They’re pretty good and offer new releases and some favorites they’re not the best but surely not the worst. It’s nice that you have your choice of movies and can pause and restart whenever you wanted to.

Once we were seated the flight attendants came over and offered, POG, water or POG Mimosa (passion fruit, guava and orange juice). If you’ve not had POG you’re missing out. Can I just say that I just love love loved the mimosa. Shortly after takeoff they gave us the digital players and of course I had to have another mimosa.

Here’s the menu, a nice touch to have a printed one on a domestic flight to Hawaii. I’ve been lucky enough to have flown United a dozen or so times to Hawaii in first, and I’m pretty sure they abandoned menus in first to Hawaii four plus years ago.  Although a very minor thing it sure adds to the excitement of visiting the 50th state.

I loved the food I thought it was better than most meals in domestic first, plus the fact that they were Hawaiian inspired was even better. The best part was the haupia pudding with shaved coconut and berry compote. Yum Yum double yum. 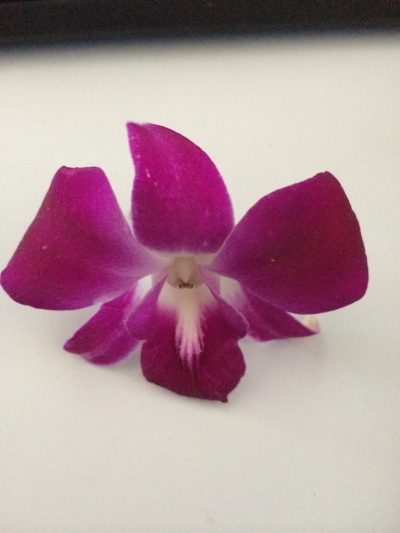 Overall the flight was great, the flight attendant was really great to my three year old. They made sure her food was served in a way that was easy for her to eat, the sauces were on the side, and they put her plates on our tray tables. Little ones are nothing short of unpredictable, and making sure that she had as little chance of spilling and not liking her meal is always a plus. Also they made sure she had milk, it was limited on the plane, and they went and saved some for her. I just love that they made sure the experience was good for her as it was for us. The only knock I have was to say the meal service took a long time. From start to finish it was two hours, and not just for us, but for the whole cabin. Sure it’s plane food, but two hours for a simple meal is too long, it’s not like we were at Spago or flying Singapore Airlines.