A few weeks ago I had the opportunity to stay at the Marriott Oakland Convention Center. I’m not a Marriott person, and probably stay at one of their properties once or twice a year. It’s not my goto brand, but due to a corporate rate my wife got us for an event we were attending it was worth it for us to stay here. The hotel is on Broadway Street in Oakland, on the edge of sketchville, and because of that I would not find myself walking around this neighborhood after dark. It’s close to a lot of good things in Oakland, though like Jack London Square, China Town, Lake Merritt and close to BART too.

My wife had called them a few days before and requested early check-in (it’s normally 3 PM) and an upgrade if possible, she flaunted my lowly Gold status, earned via reciprocal rewards with United Airlines. Hey it doesn’t hurt to call and ask. In this case they said to call at noon on the day of and they’d see what they could do about early check in, we had an event to attend at 4:30, and it would be nice to show up at the hotel early in our street wear before we got dressed up. Upon calling they said we could check in at 1 PM, so we made sure to hightail it there. When we arrived on time they didn’t have a room available for us, and told us it would be an hour or so. Not that big of a deal, but why tell us you’d have a room available, and it’s not ready when they say it will be? I just wouldn’t have rushed there. Thankfully we had not had lunch so we went out to grab a bite and by the time we got back at 2 it was ready. 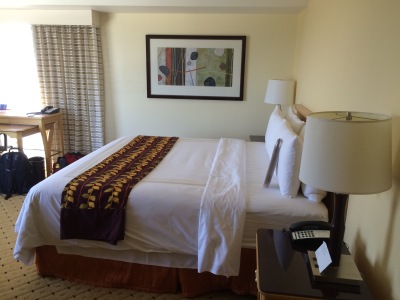 The check in agent was super friendly and helpful, and said we’d love our room. I was hoping for some killer suite and immediately thought we’d really scored. Secondly, because the lounge is not open on weekends (an amenity of gold status and higher) we were give a coupon for two to enjoy continental breakfast in the restaurant onsite.

We made our way up to the 16th floor and to the last room at the end of the hallway. We didn’t get a suite but we did get a corner pie shaped room, with two sets of windows facing the bay and Lake Merit. So not too shabby. The room was average in size, not too big and not too small. I wonder what the guy would have said if we really got a nice suite.

Anyhow the room was equipped as I’d expect any three star city hotel to be. Besides the king bed, we had a medium fridge, work desk, side chair, TV and coffee maker. The bathroom was a bit smallish and could not be occupied by two people at the same time, nor could you hop in the shower w/out closing the door first. 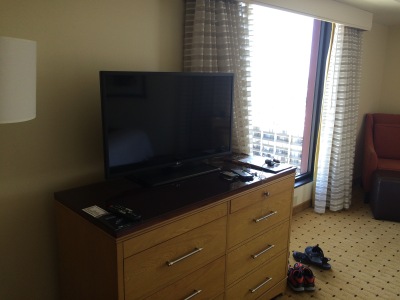 Since the room was pie shaped, at the tip of the room were corner windows one featured a view of Lake Merritt and Laney College and the other Alameda, the Bay and the city bird of Oakland the metal crane. 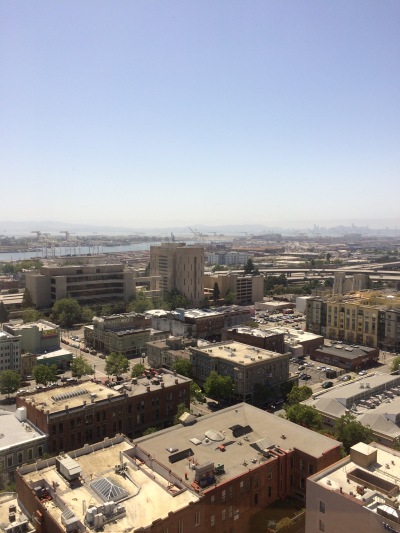 You’ve gotta love a bathroom so small, that the door hides the shower and requires you to close it before you can even get in the tub/shower.

Never see this brand of products have you? 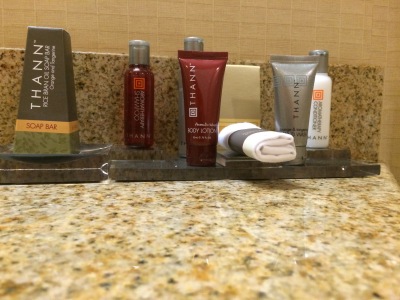 Overall for our purposes this was a fine hotel. I’m not meaning to dog it, but I would not stay here if I was on vacation or on holiday. I’d rather stay in the city or in a resort hotel closer to the action and quote possibly in a little better area. Again it’s not the worst part of town, but as I said I’d not be walking around this part of town after dark. On the other hand, it’s great for business travelers needing something in downtown Oakland close to work and businesses, as well as being close to public transportation.