TRIP REPORT INDEX: AROUND THE WORLD IN FIRST ON THE A380

I was in Seoul, stranded for 24 hours and needed a hotel pronto. My first choice was a Sheraton property due to constantly chasing platinum status. There are actually a lot of SPG options in Seoul, but due to not wanting to take a 45 minute or longer bus/cab/train ride to a more central hotel I chose the closest one, the Sheraton Inchon Hotel in the Songdo International Business District. I really had no idea what to expect, but TripAdvisor gave it pretty decent reviews, and I was hopeful.

After a short 20 minute bus ride on the KAL Limo Bus to the property I was ready to check in shower and sleep, it had been a long long flight from Dubai and after my ordeal at the airport, I was ready to just relax and sleep. Thankfully, I was quickly checked in and given a room on the second floor from the top (15th maybe). I was told I had been upgraded, to a corner executive room, not sure what they meant, but I’ll take it. I was also reminded that I had access to the executive lounge and it included breakfast in the lounge to boot. Thanks SPG plat status.

I was really impressed with the look of this hotel. It was the first hotel in Korea to be LEED certified Green, and was designed by HOK, my favorite design firm. To be honest, I only know of HOK (Hellmuth, Obata + Kassabaum) due to their architectural prowess in the sports arena field. They designed AT&T Park in San Francisco and Camden Yards to name a few and revolutionized the retro ballpark design over the past 20 years. This was also the first hotel in the Songdo International Business District and they were very proud of that too. Now there are more than a dozen hotels here, but the Sheraton was the first.

During my visit here they had a visiting artists work displayed throughout the lobby. And let me say it was incredible. The artist Song Jin-Su has created some amazing wire art, it was really wonderful to examine and stare at these fine pieces. There were at least four pieces that I noticed, unfortunately with my amateur photo skills I was only able to get two of them to photograph well. Additionally the lobby had a restaurant, lobby bar, and Sheraton Link (their business office).

HALLWAY TO MY ROOM AT THE END OF THE HALL

Finally I made my way up to my room, and it was nice. The room had a wall of closets, with robe and slippers to use during your stay. Plus the restroom had a separate shower and tub, as well a separate water closet. Once you move into the bedroom, I had a king size bed, a work desk and side chair with ottoman. Plus wall to wall windows and a view of Central Park. Overall this room was spacious, not huge but plenty big enough for me. Plus the bed was comfortable and I needed to sleep.

VIEW OF CENTRAL PARK FROM THE LOUNGE AND MY ROOM

In the morning, I headed up to the lounge for breakfast, and I was immediately taken back by the beauty of the marble wall in the kitchen area. It was a stunning basket weave design and I’d kill to have it on my kitchen backsplash. The meal spread was pretty good too, not as extensive as I’ve had at other hotels in Asia, but it was good. In this case, they had breads, salads, soups, eggs, bacon, cereals and juices. They didn’t offer made to order meals, but again that was ok. Besides the ample seating and again a really nice view of Songdo and the park, they also had a few workstations and a printer plus a concierge to assist in other matters. 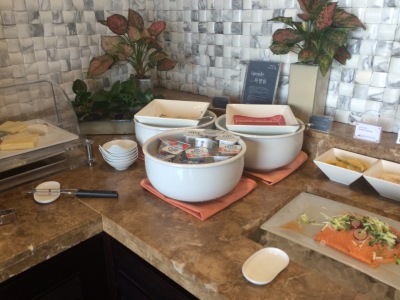 Overall this was a nice hotel for a transit in Inchon. Yes there are other much closer hotels to the airport and other hotels closer to Seoul but for my purposes it was great. There were a lot of restaurants and bars within walking distance of the hotel, plus a Lotte Market next door if you need anything. I’d say it’s like a Target, except with tons of cool stuff you can’t get here. Plus the KAL bus dropped off right in front of the hotel for about $7 each way and ran about every 30 ish minutes.