The culmination of our trip was flying Asiana’s new Airbus a380. The plane was delivered in August or September and they started using it for the Seoul-LAX sector in October. We had initially booked our flight on the three class 777 that Asiana used to fly this route, but during the summer they announced the switch over to the a380. I was over the moon, this meant two a380’ s in First on this trip and a brand new plane to boot. At the time of our trip Asiana only had two a380’ s so it really was a treat to be able to fly one of the grand birds.

We were very well rested for our 10 ½ hour flight from Seoul to LAX. We had an 8 hour layover in Seoul and just lounged around the lounge, getting back into non-vacation mode. About 45 minutes prior to our flight and agent for Asiana met us at the lounge and escorted us to the gate. This was a nice touch. They were in the mix of boarding, but he just walked right up to the ticket reader scanned our tickets and escorted us to the plane, and handed us over to the cabin crew. Pretty damn cool. I tried not to look at the people starring at us wondering why we were getting special treatment.

There she is, our ride to Los Angeles

Upon boarding through door 1L my wife and I were escorted to seat 2E and F.  The cabin crew were extremely friendly and made us feel at home in our cocoons immediately. The seats we had were middle seats and perfect for people traveling together that want to talk and enjoy the flight together. If you’re traveling alone any seat will do, the middles have a retractable middle partition so if you are stuck in the middle you don’t have to look at the stranger to your left or right. That being said the windows are probably best for solo travelers. Also of note the window seats are slightly staggered from the middles so if you wanted to talk to the person across from you in the window they would have to peak out and look back at you a bit. Not that inconvenient but something to think about.

The First class cabin layout is at the front of the plan on the lower lever and consists of 12 seats 3 rows in a 1-2-1 configuration, on this flight it was 7 of 12. The seats are actually more appropriately called suites because they have sliding doors on one side, yes that’s right sliding doors that completely ensconced the suite. So effectively you have a fully private seat and 180 degree lie flat space. Also the TV screen is upwards of 30” and you’re provided and iPad like device to control the seat position and lighting. Just incredible. More on the suite shortly.

Our seats in the middle row seats 2 E/F

Storage closet in my suite. It was wide enough for my sweater and pants,

and had a slide out hanger rod. Oh yeah couldn’t resist my version of a selfie 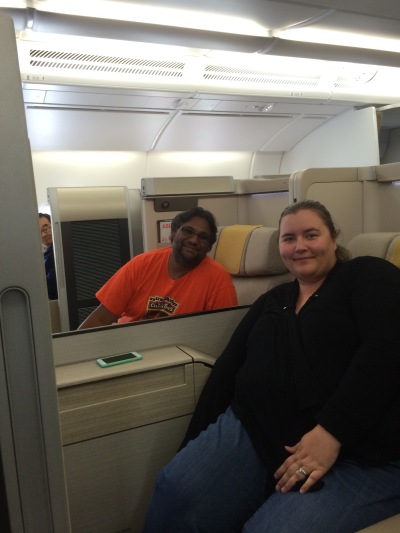 Here we are getting ready to go

Spying on one of the window seats

Also at door 1L are stairs leading up to business class and the smaller coach cabin. There are also 2 bathrooms at the front of the plane exclusively for the First Class guests. One is in front of 1K behind a curtain and is quite large. Not Thai First Class a380 large but pretty large. Then up a small set of stairs is a hidden bathroom next to the cockpit door. It’s a bit smaller but still very nice. This one is shared with the pilots, that being said I never waited to use the bathroom and as is usual with most Asian carriers the lavatory is cleaned between uses. You could almost eat off the floor, that’s how clean they were.

Once we were settled in or seats, we were presented with a lot of goodies. I love getting gifts on planes. We were provided with some very comfortable slippers, and pajamas. The PJ’s were nice they were a bit warm, but I enjoyed changing out of my street clothes. There’s nothing like getting brand new PJ’s on an airplane and swapping out of your grungy clothes and getting comfortable. It’s just a decadent feeling. It was just divine, and I implore you to try it out sometime, even if it means bringing your own. Plus we received a nice Salvatore Ferragamo amenity kit.

Shortly after this we were provide our choice of pre-departure beverage, and of course I chose Champagne. Today they were serving Pol Roger Sir Winston Churchill 2000 it was a fine champagne. Something I had never tried, and frankly at $200 a pop, don’t think I’d be trying sometime soon, unless it’s free. I know funny huh. I have to fly to get the good stuff. In my not so cultured past I’ve had Krug and Dom Vintage 2000 and this holds up quite nicely. Although I just like ordering Dom, because it makes me feel like a high roller, because that’s what they order right? In any event I think I had 3 glasses prior to take off. I was definitely on cloud 9, or cloud bubbly if your prefer. 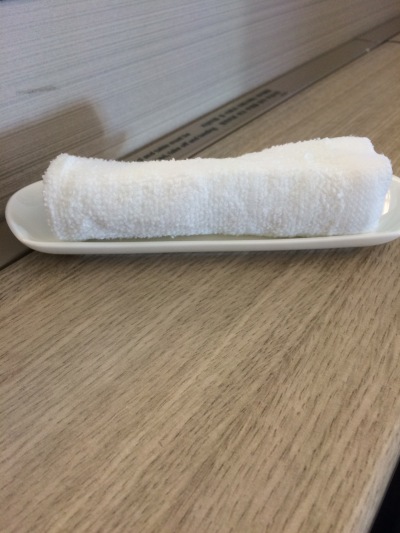 Living the high life, what is this a hotel room? 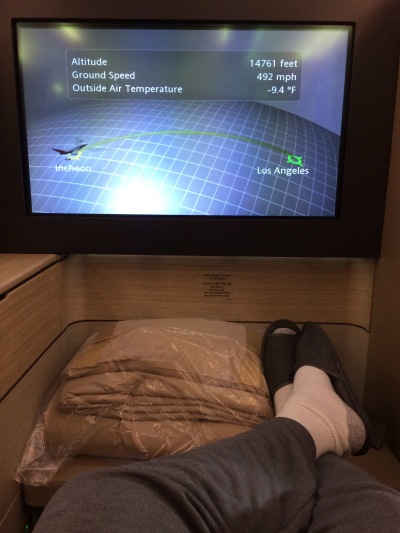 Getting comfortable, slippers and duvet

Finally we were provided with the drink and dinner menu. I was truly impressed with the drink and food selection. I would say they could give Lufthansa and Singapore a run for their money on variety of drink options in the air and blow Thai out of the water. I had so many choices to make I was just not sure what to do. My heart was in a tizzy. What do I drink? What do I eat? Will it pair well with my meal? I mean seriously can you have JW Blue with caviar? What goes best with BiBimBap? I know first world problems here. But what can I say, when in Rome you’ve gotta live it up as long as you don’t act like a total idiot.

Diner was a gastronomic delight and frankly I had too much to eat I tried to be smart about what I ate, but I was hungry and hey had so many choices I didn’t know how to stop. I’m on that see food diet you know.

The food and drink menu (please click to enlarge) 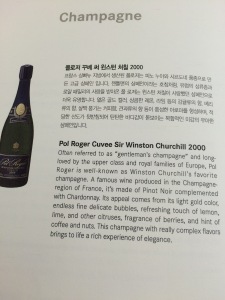 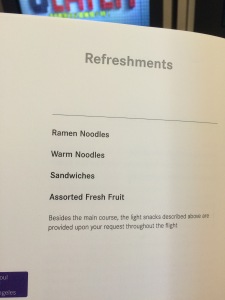 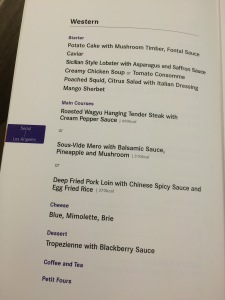 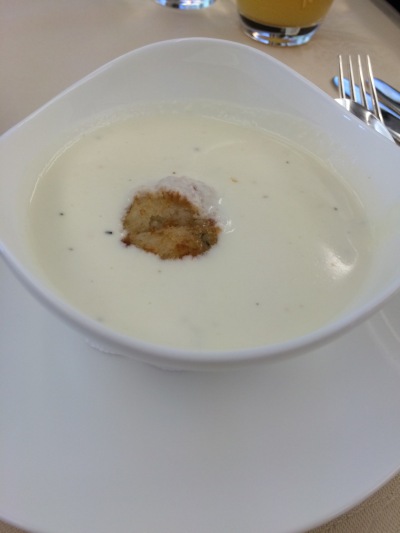 Poached squid and citrus salad (my wife had this)

My wife’s entree was a Wagyu Hanger steak, she said it was delicious

Cheese course, as if I’d not had enough 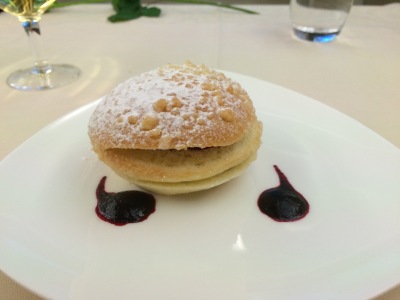 And finally a forgettable desert. Not everything can be perfect

The other amazing thing about this plane was the seat. This was my first time in a fully enclosed capsule. I was just so excited. Not only did the seat lay flat 180 degrees, and have plenty of room for my trim body, but also the privacy because of the sliding door and privacy scree between the middle seat. Beyond the general comfort of the seat, the staff provided a duvet for your seat and a very nice blanket and pillow. Although I find these days in these plush seats more than one pillow is needed to make me comfortable. Mental note carry my Anna & Elsa one from home next time. Also, because the seat enclosed on all sides, you felt like your were in your own capsule room. With TV, remote, headphones and light control. All that was missing was the person to hand feed you cheese and fruit. But since the service was stellar, I was okay w/out that the servant. Ha ha. But seriously, the staff were attentive when you wanted and left you alone when you wanted. They just knew how to take care of your without you asking or lifting a finger. In my case shortly after the wonderful meal I wanted my bed made, they took care of that and I promptly fell asleep. My intention was to stay up watch a few movies and have a few more glasses of something, but I just couldn’t keep my lid open. I really wanted to take a tour of the coach and business class sections as well as the business class bar on the upper deck, but I could not motivate my body out of its snoring slumber. Then about 1 hour prior to landing I woke up and they immediately made my seat up and provided me with some hot tea. They were just starting to secure the cabin for landing, yet seemed unfazed with a drink request or providing me a meal if I wanted it. Try getting that from United or American. I had declined breakfast, I was just not hungry. It looked good from peaking over at my wife, but the thought of one more morsel made me ill. Too much dinner for this guy.

From a comfort level I really loved the seat I think its right up there with Singapore and the new Lufthansa First Class, but I’d give a nod to SQ on their now old first class, due to the width of the seat. Although it’s private it’s not private like this one was. On the privacy side though, this reigns supreme for me. But I’ve not tried SQ, Emirates or Etihad suites yet so I have no comparison. Wait till March and the story may be different. That being said if you want privacy this really had it. LH and Thai just don’t but that’s not always that bad. It’s just a different experience. Service on the other hand was top notch. Right up there again with SQ. They were excellent on all levels. So for that, I give them high marks. Overall an incredibly enjoyable flight.

A perfect bed in the sky 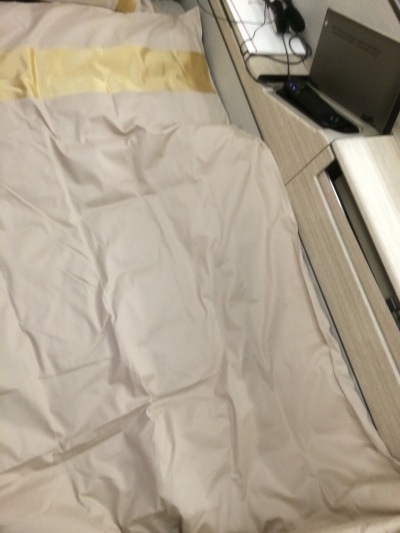 Gotta love the panorama setting on the iPhone, my 360 view doors closed and partition up 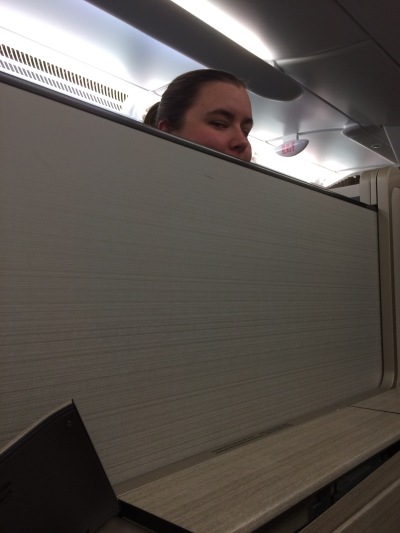 One of the coolest features stars in the sky.

If I had to knock then on something, and I think I’m grasping at straws here, and for me really minor items to boot. It would be the placement of the power outlet in your seat. It was almost below the bench where your feet would be laying. So if you had a phone charger it would be rather inconvenient to plug in your phone and use it. Besides that when in bed mode the plug was below the cushion area, so if you had forgotten to plug something in prior to making your bed, you were SOL. This is really a minor thing, just something that you need to prepare for. The only other thing is luggage storage. You could easily fit a very very small roller or laptop backpack below your foot storage, but that’s it. All other carry-ons were stored by the crew in common area in front of the cabin. This just made it inconvenient if you wanted to get something, but the converse side was a very open cabin, since there were no overhead compartments. Design wise this was great, just slightly inconvenient. Again I’m grasping at straws here.

Asiana First Class was amazing, the seats were private, comfortable and service was top notch. If you’re in need of flying from Seoul to anywhere this would be a fabulous option for sure. I’ve not flown a ton of First Class products but I’ve been fortunate to fly a few and this ranks up there with Lufthansa and Singapore.