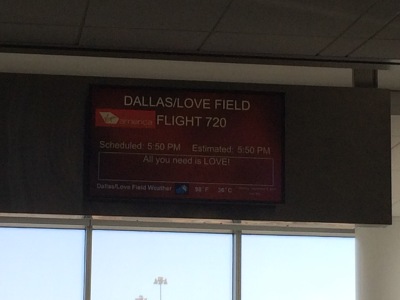 I’ve flown Virgin America a handful of times from the Bay Area, but all of my flights have been to Las Vegas or San Diego and only in Coach. I was needing to head to Dallas and found a First Class fare $50 cheaper then any other airlines coach ticket, even Southwest!! Well what’s a person to do, fly in the back of the bus for more moolah or fly up front for less. Let’s think about it for maybe two seconds. I immediately bought my ticket to Dallas Love Field on Virgin America from SFO and away I went.

I really got a lousy picture of the First Class seat. Sorry. In fact most of my pictures were lousy this trip. I blame it on Virgin’s Mood Lighting. If you’ve not flown them before they like to play with the cabin lighting and make it blue most of the time. In general it’s very very pleasing, but you’ll see how that low light jacked up my pictures. Anyhow they offer a 3 row 2-2 configuration on all of their flights in First since they only fly Airbus 319/320’s. They’ve flown this same style of bird since the carrier was born back in 2004 as a startup with 25% backing from Richard Branson and his Virgin brand. They have not modernized their fleet, yet back in 2004 their brand and features were leading edge for a domestic airlines. Yes they have bought new planes, but they all offer the exact configuration with in seat on demand entertainment with the capability to order food and drink from your seats from your TV too, even in Coach and Wi-Fi. The First Class seats are not lie flat, but they do offer a 75% recline I’d say. You can definitely stretch out and get comfortable plus lift up your legs with the recline feature. Again a nice touch 11 years ago, but with American, Delta, Jetblue and United offering lie flat 2 and 3 class planes flying coast to coast Virgin needs to up it’s game. That being said, for 50 bucks less to fly this way vs. cramped in the back I’ll fly it anytime. 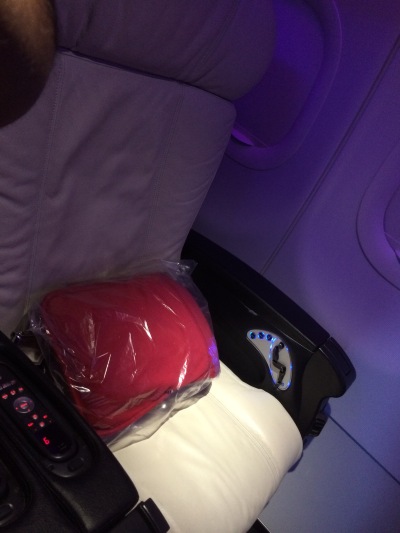 Above: 3/4 lie flat seat with articulating foot rest. Below: seat back pocket for the amenity kit, head phones and other stuff 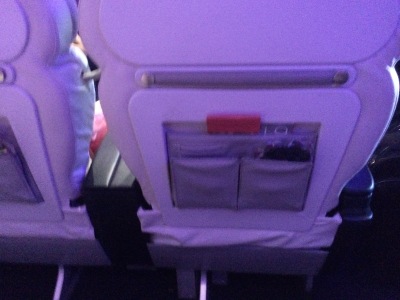 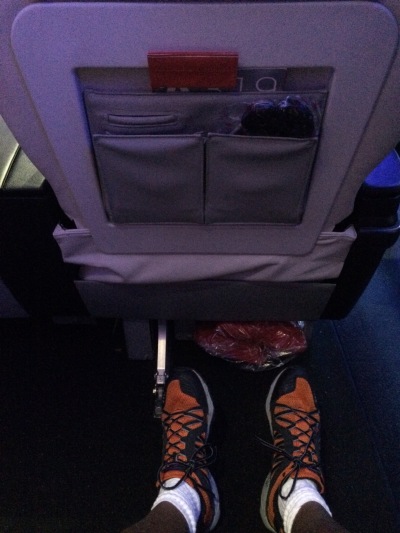 The AVOD is tucked away between the seats and folds up to view. It’s touch screen but also offers a remote. They have 20 or so movies and about that many TV shows, all free up front. The only gripe it must be stowed during takeoff and landing, which cuts into my time watching Magic Mike 2 or Pitch Perfect 2.

Below: The menu and drinks. Notice it’s the entire days spread, they could offer a nice touch by providing a menu based on meal. 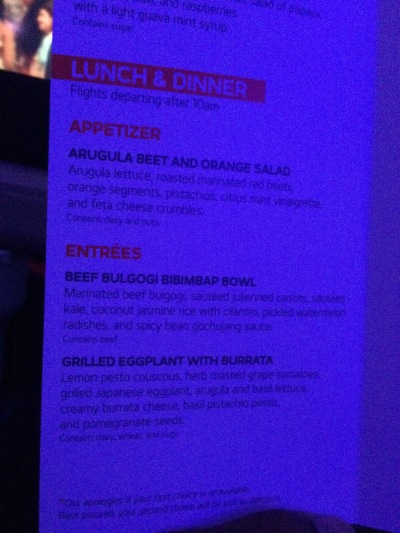 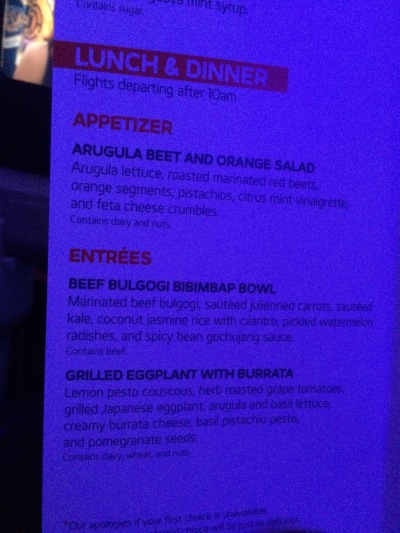 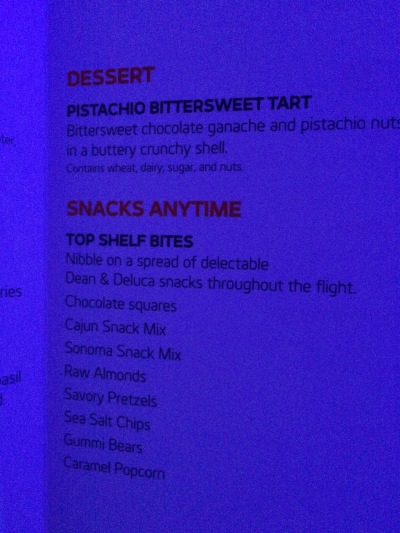 Bread and butter with a side of socks 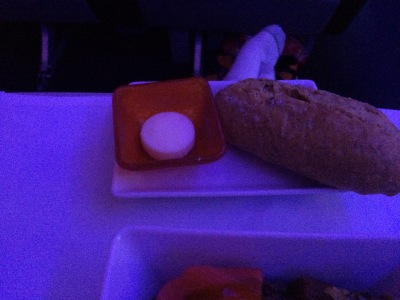 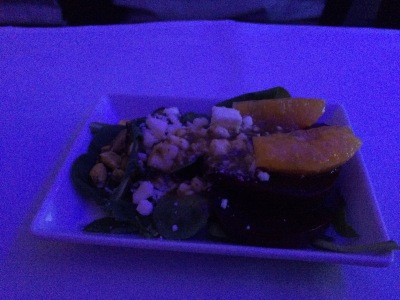 Above: Aragula and beet salad with feta and orange segments Below: Beef Bulgogi with vegetables and rice (delicious)

Below: Based on my AMAZING picture this could be anything, but it’s a pistachio tart

CONCLUSION: The seat and service were fine, not great, but good enough. It’s only a 3 hour flight to Dallas from SFO, if I was going cross country I’d want a lie flat seat. That being said I’d take it over an American Airlines 737 in First any day. More legroom and better food. Although American has improved their catering of late and the new 737’s also have AVOD with more options and a better screen.

They’re a hip airlines with a young vibe, and that in and of itself is refreshing. Can they jazz it up a little more? Yes. Are they slowly falling behind the big guys? Perhaps. Do they have a good route network? Sort of. Lots to consider when flying them, yet for a boutique airline they do a pretty good job.