I don’t fly Delta a lot but when I do I’m generally impressed with the ground service and service in the air. The staff I’ve had the pleasure of dealing with have generally been friendly and willing to help you out. During the summer I had a trip to Florida and it was actually cheaper to fly Delta in first then any other airlines in coach. Well that was a no brainer a transcon flight in first vs any other airline in coach. Giddy up.

Well everything went as planned on the first flight from Florida to Atlanta, not much to expect on a 1 hour flight. Once I got to Atlanta, I had about 54 minutes to transit terminals and make my connection to San Francisco.  This was barley enough time to get terminal to terminal let alone stop and get food. My flight left at 9:59 PM from ATL, I knew they wouldn’t have a full meal but I was hoping for something. Well my idea of something and Delta’s were very different. The flight attendant came buy with a snack basket, from what I recall it was not more than Bischoff Cookies and chips, not even warm nuts. I thought ok, this sucks but I’ll make do with the options they sell in the back.

Well, this is where the wheels fall off the bus. The FA said I could buy what they were selling back there, but I had to wait till coach was served first. Ok, waiting was fine, but having to pay for buy on board, really? I confirmed with the FA that she said I had to pay, and she said yes. I know we’re only talking 8-10 bucks, for crackers and cheese, but when you pay for a first class ticket and you ask for food from the back, just give it to the person. Don’t take food away from someone, wait till the cabin gets first dibs, I get that. But to pay for it? American and United will gladly give the guests up front a buy on board item from the back for free. Why wouldn’t Delta? Especially on a 5 hour flight, that’s entirely too long to not offer a bit more than a snack or force you to pay for a snack box. 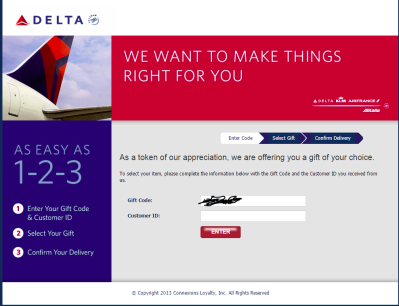 I was on a redeye from ATL to SFO, flight left ATL at 10 PM EST. I didn’t expect a full meal on the flight in first but the snack basket was not enough. I asked for a snackbox from coach, and was told I could have one but must pay for it. I was appalled. I’ve never flown any first class product and been told I had to pay for a coach snackbox when flying in first, let alone paid first class. Seems like a pretty cheap thing to do. Your flight attendants should be empowered to give a meal box away for free. American and United do that all the time, even when a full meal is served and the guest doesn’t want that they will provide ANY choice from coach and cover the cost. Delta you can do better.

That same day I got a response back, in less than 12 hours with a $25 gift card. Let’s just say between the quick response, and a we’re sorry gift, I was happy with the outcome. Sure an actual meal would be better, but hey at least Delta did something right and at that very quickly.

Thanks for sharing the flight experience you had with us. I can recognize your dissatisfaction when you were told to pay for a coach snack box since the snack basket served wasn’t enough. I’ve passed your comments directly to the In-Flight Service team, so they can consider your experience when making needed changes to improve our service and better the customer experience.

Delta Choice Gift
While nothing can compensate the unpleasant experience you had, as a goodwill gesture, I’m sending a $25 Delta Choice gift. You will receive a Delta Choice gift code, from delta@deltachoices.com, in a separate email within three business days and you can select the gift card of your choice within 60 days of receipt. Included in the gift option are several merchants that you will be familiar with as well as our new Delta gift cards. Once redeemed, the gift cards have no expiration and may be used by anyone you wish. You will want to add this email address to your list of accepted addresses. Our Delta Choice gift code email will include a customer ID and instructions on how to redeem the gift. Please check your spam folder if you don’t see the email in your inbox.

We look forward to providing an enjoyable flight and can’t wait to welcome you onboard.

My Choices, Amazon Of Course