Visiting Thailand and the island of Koh Samui

Wow what a flight we had on Lufthansa 491 from Seattle to Frankfurt. Once we landed we were greeted at the tarmac by a driver and a Mercedes Benz minivan. Unfortunately we arrived at a remote apron, so we had to bus/drive to the terminal. Thankfully being in first has perks on the ground too and that’s why we had a car waiting for us. There were two cars based on whether you were ending or connecting. Since we were connecting, we were sent to the terminal and then dropped off. My only pet peeve, the driver had no idea where to send us form there, we were left on our own. Since we had a 4 plus hour layover, our fight was not on the board, we had to find an agent to tell us what terminal to go to. I know first world problems here. In our case we lucky this was our terminal.

After going through security to get back in the terminal, we were left to our own devices. I know that we had lounge access but I didn’t know if it was the Lufthansa Senator lounge of the Lufthansa First Class Lounge. I figured we roll the dice and try the latter first. Worst case scenario they’d kick us out and send us on our way. Because we were traveling onward on another Star Alliance carrier in First, I thought we would not have access, so to my very happy surprise we we’re allowed in. Yippee!!

I was truly surprised in how nice this place was. Besides having a dining area with self-serve food, with some really amazing options. Including freshly sliced prosciutto and fresh made Nutella. They also had a cigar lounge, bathroom suites and an incredible bar selection. I was blown away. I’ve been very lucky to have visited The Private Room four times in Singapore, which is a lounge within a lounge within a lounge. As well as the Cathay Pacific First class lounges in Hong Kong and the Qantas First Class international lounge in Sydney to name a few. These are some of the best in the world from what I understand, but the Lufthansa First Class Lounge in Frankfurt took the cake. Every amenity I just mentioned was free here, it was just incredible.

Ok so like an idiot I forgot to take a picture of the actual sign to the Lounge, this was the best I could do.

It’s the one leading up to the shower suites.

One of many seating areas. I realized in my giddiness, that I took many pictures of the food, showers and booze but very few of the lounge itself.

Obviously I only took pictures of the things that really are a priority to me.

Ok that’s all you get for seating. These faces the gates, so you could see airplanes taxiing in/out.

Not like you’d ever know. As far as I’m concerned I’m showing you a picture of the lobby of the closest Park Hyatt or SF Financial District lobby. 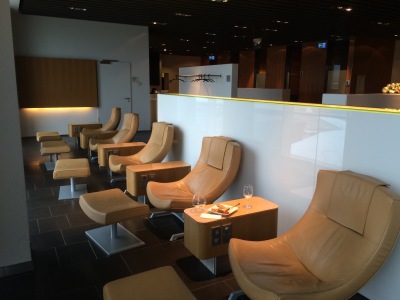 Every table had a nut set up, and a drink menu. Did I forget to mention that they had 4 pages of Whisky and Bourbon?

THE SHOWER SUITE WAS SWEET:

After arriving off a 10 hour flight my wife and I wanted showers and assumed they were just standard shower rooms, boy were we wrong. These were shower and bath suites to be more exact. The room was almost as big as our whole bedroom at home. Not only did it include an amazing rain shower, it also had a full size tub. What seriously? Beyond that it included some really nice bath amenities by Etro (never heard of them) but they were great, and the traditional Lufthansa rubber duck. I only thought you got these in the First Class Terminal, so I was very surprised and happy to get one. One of those silly silly amenities that I just wanted to get. Now I have a gift for my kid too, she will be very very happy. The shower was just what the doctor ordered and allowed me to get refreshed and pilfer some shower supplies for the Casa.

Priority A: get a shower, and when doing so pilfer these wonderful products. Again take note of the

fact that I spend more time taking pictures of the amenities and not of the expansive shower suite, which is almost bigger then my bedroom at home.

Yes Virginia, there is a bathtub 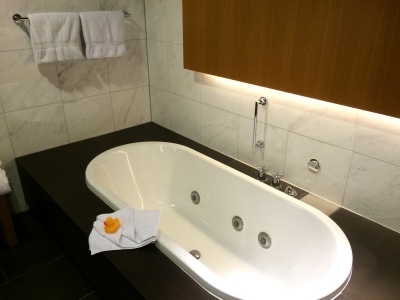 My first Rubber Ducky- only one complaint why is he not dressed like Santa?

The incredible rain shower, apparently they have no idea of the major drought we’re having in California,

because the amount of water this thing uses was incredible, not that I’m complaining. 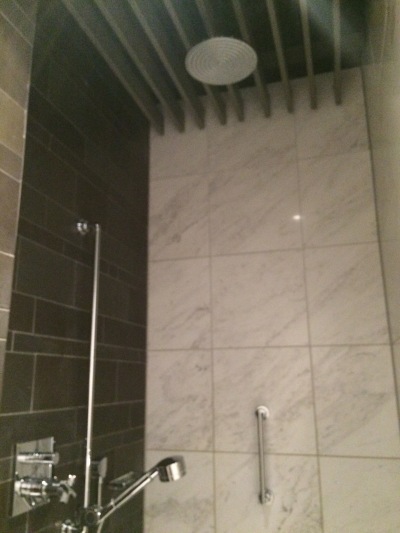 CAN I GET A VOSS AND A DEVILS DAYQUIL PLEASE:

Now it was time to eat, drink and relax. The four page Whisky/Bourbon section of the menu made life difficult. Yes I said that the Whisky/Bourbon menu was four pages long!! Beyond that the menu had a ton of other high end rums, gins, vodkas, champagnes and specialty waters. This was where my wife became giddy as a school girl, her favorite water is VOSS, and they had it here. She said once she saw it, she was going to have at least four of them, and I know she had that many and maybe even two more.  Sure you can get it at home but when its 4 bucks for a 500ml bottle, and you can get it for free, it would be like me ordering a glass of JW Blue. Go figure. It’s just water to me. The hardest part for me ended up being what to order, since it was close to 10 AM and I’d basically I’d been up for two days. So I just went with Perrier-Jouet. Eventually I moved over to what my best friend calls the Devils Dayquil Laphroig 18. And boy was that a fun glass, and most likely my last glass ever or this fine fine product. Needless to say the bar menu was worth its weight in gold and if I ever have a chance to visit this lovely goldmine of a lounge again, I’ll be sure to have eaten less and drank less on the plane before getting here. Yeah right that’s not going to happen, I’ll just have to try harder next time.

Priority B: Get hydrated

As if the bath suite was not enough, the water menu made my wife squeal with joy

And this is what made me squeal with joy!! 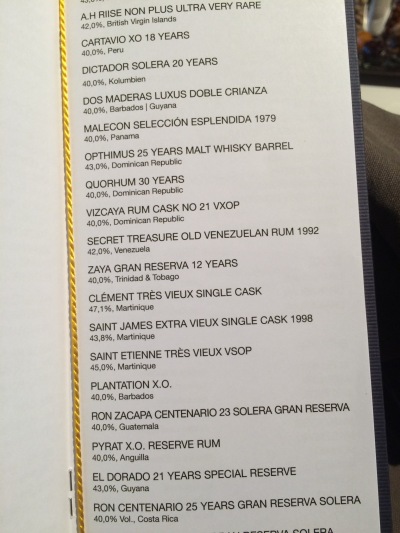 Did I mention they had four pages of Scotch, Whisky and Bourbon’s

This is why I had such a hard time deciding what to drink. Damn what a spread

calls is the Devils Nyquil.

IS IT POSSIBLE TO GET THE HOOF WITH THAT?

The last thing that made this lounge special was the food spread. We showed up 30 minutes prior to the breakfast/lunch changeover, so we had a chance to eat and sample both menus. Both meal setups, were very diverse and very delicious. Or at least the parts I sampled were. Besides having fresh breads, jams, diverse arrangements of cheeses and meats. They also had fruit, yogurt, and several varieties of muesli, salad and all the fixings. Then on the hot trays they had eggs, sausage, fish, broiled tomatoes, and tons of other items. Check out my snaps to see them. Then came desert, as if I could not have enough!! Cakes, tiramisu, mousse and a pear walnut strudel. Oh yeah did I mention the cured meat legs for our enjoyment? Besides the fresh cut prosciutto on an amazing slicer, they also had a cured deer or elk leg and had fresh sliced it. Damn were they good and incredibly impressive to look at too.

Since we were here for so long, about four hours, we saw breakfast and the lunch spread, and they were both magnificent.

Sorry these pictures are possibly out of sequence, but you can see there’s a lot to choose from for sure. 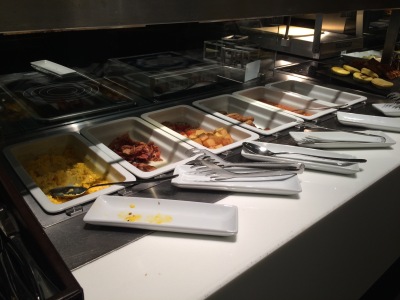 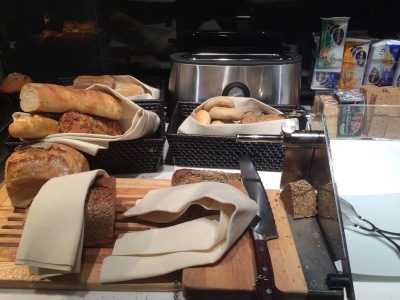 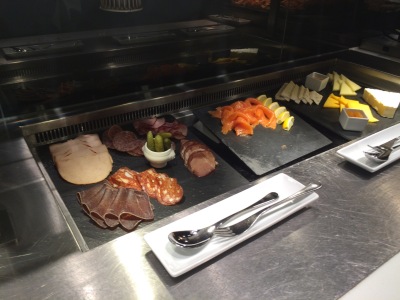 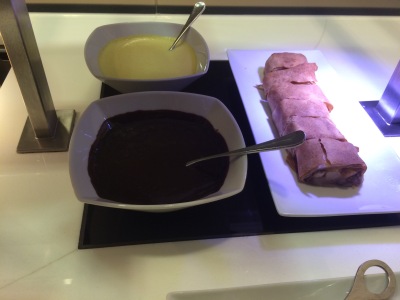 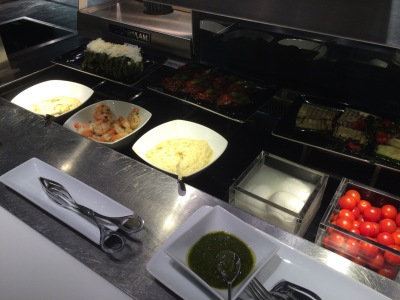 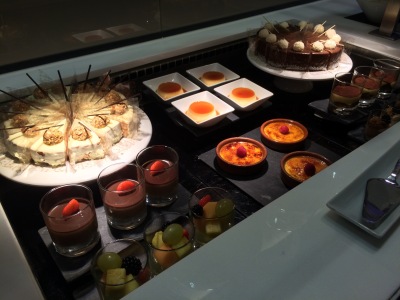 And if you needed any more motivation to find your way into this lounge,  try the cigar lounge 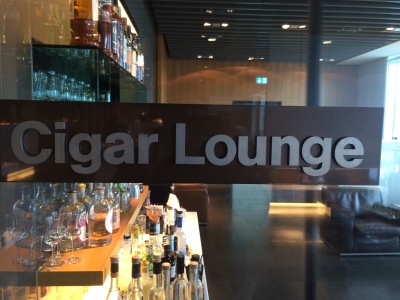 Sadly as they say all good things must come to an end and about five minutes prior to boarding, a Thai Airways ground staff handler came to our seats and escorted us to the plane. This was a sad moment indeed, but hey we were about to hop on the upper deck of an a380 and sit in First Class again. This was my second TG First Class experience, but both of our first times on an a380 in First. I’ve previously been on Emirates in business on the same airframe, and the two of us flew Singapore in coach once. The horror of it all.

The lounge was impressive and I think I loved it even more because we had no idea we would get to use it. So I had not built up the potential experience in my head yet or read much about it. For me it definitely stands next to Singapore’s Private Room and Qantas First Class Lounge and in some degrees is leaps and bounds better. Between the escorts to the terminal, the expansive bar menu and incredible meal service I was blown away. Sure SQ and QF have plated meal service, but their bar menu (impressive in its own rights) is not as nice as LH’s. Plus the shower suite. The others have a nice room, but not to the degree as LH again.

This truly was a wonderful little respite between flights.