TRIP REPORT INDEX: AROUND THE WORLD IN FIRST ON THE A380

Sadly all good things must come to an end, scratch that, it would be nice if they didn’t. This was my last flight of my a380 around the world trip. And I was a little sad about it for sure. I had three count them three great flights on Singapore Airlines on their a380’s and one amazing flight thus far on Emirates and now I was about to embark from Dubai to Seoul.

After about a seven hour layover in Dubai in their glorious terminal three lounge I headed for the plane. When departing from T-3 in first class you have the opportunity of boarding from it. There are gates on the fourth level in the lounge, once your boarding pass is scanned you take an elevator down two levels and walk to your plane. The only other people on this level are other guests heading to their flights also in first. Once you make your way to your plane you board on the upper deck turn left and head to your seat. You know you’re living the good life!!

Emirates offers 14 seats in first where most have 8 or 12. It doesn’t feel crowded, but it’s surprising since they are such a premium airline. This is an area where I think they could get a bit more innovative and find a way to shrink the seats in the cabin and offer more space per person.

Again, it doesn’t feel cramped, but if I were to rank the personal space and usage of it per person of the four a380’s I’ve flown, it would go Singapore, Asiana, Emirates and then Thai. Don’t get me wrong there are many things Emirates does RIGHT, showers in the air and an amazing business class lounge at the back of the second deck. As well as mostly amazing service, I’ll get to that a bit later on. I found the cabin beautiful in its own way if not a bit blingy, they are just a little over the top I guess. But hey Emirates is Emirates and they don’t shy away from this, and that’s ok. I have to admit up front that this review could be better, but after 13 reviews thus far in this trip report and 9 other flights I was a little pooped of photos and travel details, so forgive me if I don’t dissect every detail here. If you want to read 4000 words about my glorious trip from San Francisco to Dubai on an identical bird here you go.

After being seated in my fabulous seat I was ready to drink, eat , sleep and shower. Yes in that order. It was past 2 AM local time, and I was ready to just relax.

I really loved the seat and space, plenty of room to relax and enjoy a good Dom 2004 and a crappy movie. Emirates subtly hits you over the head with amenities. Ranging from a lie flat seat, sliding doors to your suite, an iPad control center, electronic double window shades,  desk lamp, personal light, vanity mirror, and yes I needed it. Additionally it offers a mini-bar , storage closet for your clothes and no they don;t want you to fly naked that’s what the comfy pajamas are for!! Finally, they provide you with slippers, eye shades and a pretty cool amenity kit.

A little bit of pre-departure Champagne to get the flight started out right. 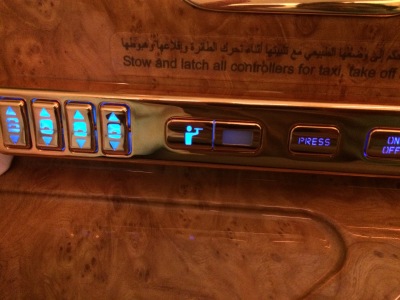 With so many goodies you get a bag. Its actually nice too. Canvas and lined to boot.

The dinner and drink menu. Because they offer a la carte dining. You get to choose what you want when you want and I suppose how much too. I didn’t eat a ton, but on two flights I was not denied a darn thing, let alone have them run out. 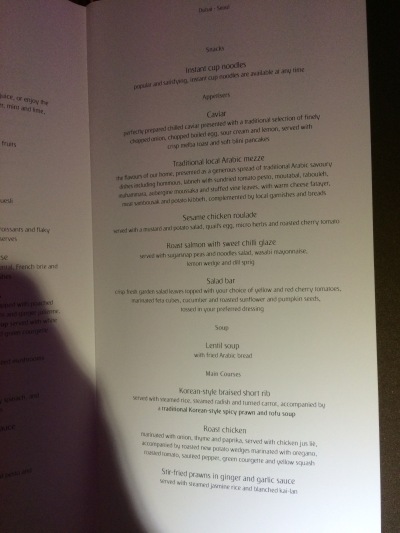 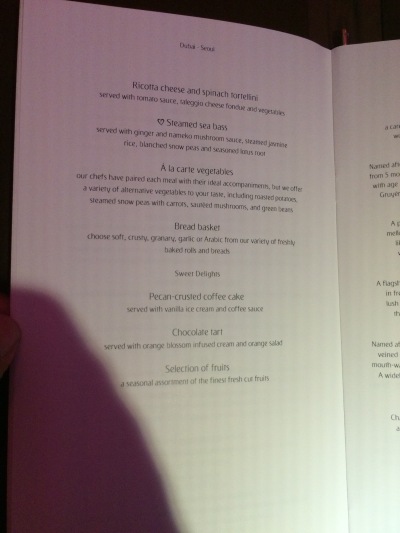 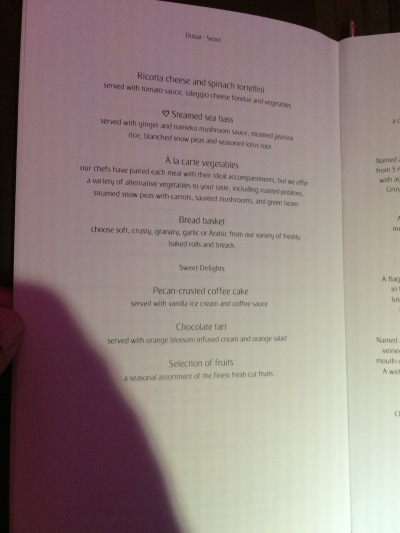 And dinner was served. I started with the Arabic Mezze and it was fabulous. Really this was enough but I just had to have a little more. 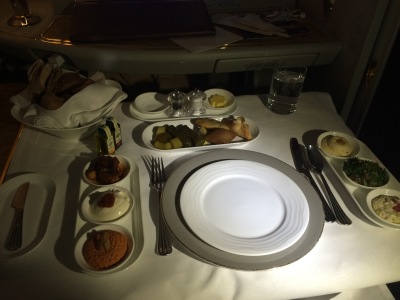 Stir Fried Prawns in ginger sauce with rice and veg 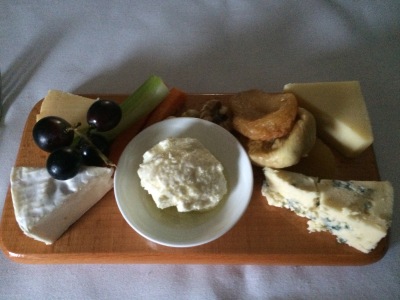 An incredible cheese plate to finish off the meal

After a 2 or three hour nap I was awoken for my allotted shower time. Emirates offers and incredible and yes I mean incredible amenity. A shower at 35,000 feet. Every first class guest is asked right after take-off when they would like to schedule theirs, I choose 2 1/2 hours prior to arrival. Once I was woken, the flight attendant carried my clothes to the bathroom, gave me a quick rundown of the shower and safety procedures and then left me alone for my 20 minutes of luxury. The room is large even for a New York apartment. You have a long covered bench concealing the toilet, a large sink at the far end. Plus a SHOWER, with 5 minutes of hot water. Also lots of bath products to boot, and yes I had to pilfer some :). This is just a cool cool feature and you haven’t lived till you’ve taken a shower on a plane I promise you that 100%. The shower has a meter that tells you how much time you have and you can start and stop it when you want, so you can manage the 5 minutes to its best. Surprisingly, it was enough time for sure. 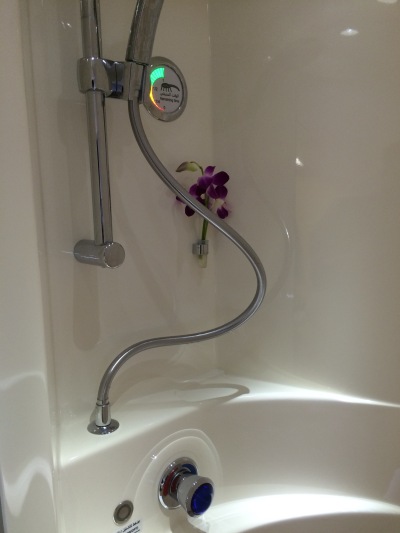 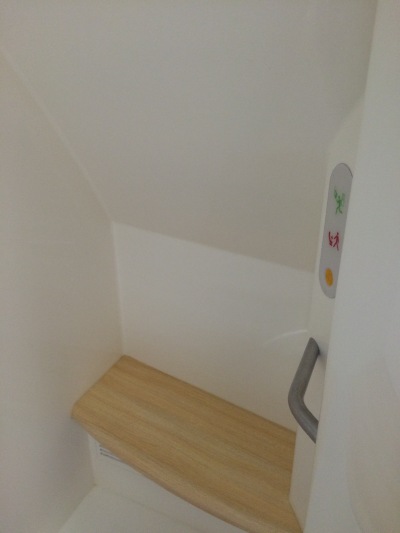 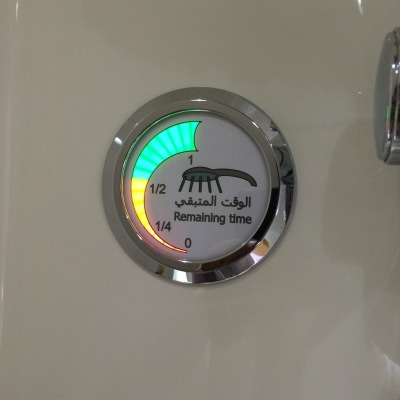 I had a good flight overall, but I had to say that the staff  on this flight was 2 1/2 if the last flight was 5 stars.  Why do I say this? Service and service alone. I had a really difficult time communicating with the staff. During the pre-flight introductions, the pilot was proud to mention that  15 different languages were spoken by the crew. The problem was that the crew working first spoke English just not that well. Now I don’t speak Arabic or Korean so do I expect perfection? No. But I do expect to be able to communicate, and that was really tough. A 100% difference then the flight from the US. This really surprised me for a global airline, and one that’s growing at an exponential rate. For example when I was ordering my meal, I had to point at every item I wanted sine the person taking orders could not understand me. Same went for ordering drinks too. Again this is a slightly minor issue, but it was just annoying that I could not communicate that well with the crew. Would this prevent me from flying Emirates ever again? No. This was my fourth flight ever on EK, and the first time this happened.