Over the past month I’ve stayed here twice. For a full service hotel not in Calgary or Edmonton, this is a pretty good spot.

They offer a 13 story tower wing and a two story section called the west wing. Apparently it was the original part of the hotel and over the years the original owners added on to it. According to the staff Sheraton purchased it from the family 4-5 years ago, and during that time they are bringing it up to Starwood and Sheraton standards.

On my first visit I was upgraded to a 2 room suite on the 8th floor. I was pretty impressed with it. It was nice. Besides the sleeping area with a king bed, it boasted a couch, additional TV, a work desk and kitchenette in the other room. The bathroom was right next to the front door of the hotel room, so if you’re in the bedroom you need to go through the family room to shower or freshen up. Not inconvenient, but sort of odd. 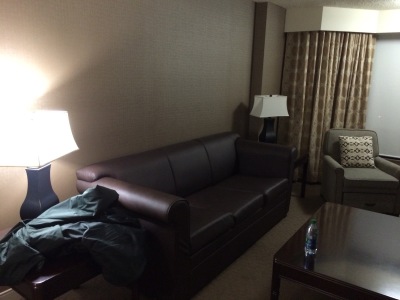 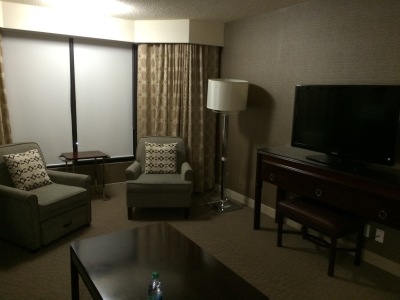 TV and balance of seating area 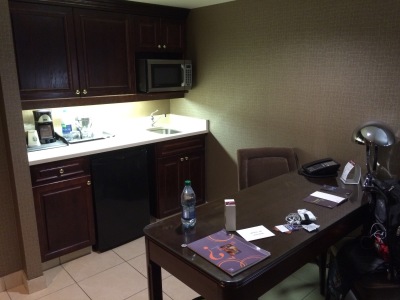 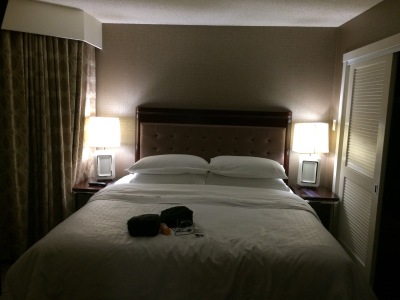 Bedroom, slightly small, but the bed was comfortable 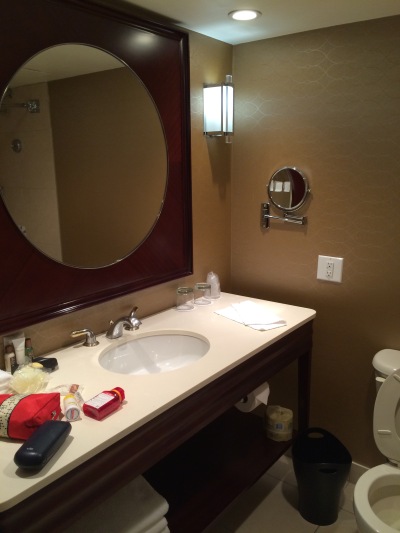 The hotel also had an executive lounge, so as a platinum, I was given access to it and the continental breakfast it had in the morning. It was not fancy but had the usual suspects. Oatmeal, cereal, pastries, coffee and tea as well as juice and bottled water. It didn’t blow me away, by any stretch, but it was fine. They had my favorite Tazo mint tea so I was happy.

Besides the lounge they had a lobby bar, a separate restaurant, gym and a pool. Currently closed because they are converting it from outdoor to indoor, hence the power outage inexperienced as part of this conversion.

Staff overall were very very friendly. On my second visit when the power was out I ended up chatting with one of the receptionists and a food and beverage manager for almost an hour. They were super friendly and really nice. And we actually talked about stuff other than hotels. Ha. The whole while they kept apologizing for the power outage. Even though it was frustrating, it was not their fault and they were genuinely sorry.

The only pictures I took were of the suite. On the second trip I spent 4 hours in a standard room on the executive floor and it too was nice, but I slept in the west wing that night. This wing was noticeably older but had the same decor as the other part of the hotel. It just looked and felt older. The room was about 30% smaller and had non-working AC/heat and an iron burn on the floor.  I didn’t report the AC issue, I was just happy to leave.

Overall a nice hotel, but I would not stay here if I was in the west wing, just not worth it. But if I have to go back to Red Deer which hopefully is never, I would stay here. Sorry Red Deerites, it’s a nice town, but if I go back it means I have an hour plus commute to work, and I don’t want that. It’s nothing personal.