Getting lost on my way to Middle Earth 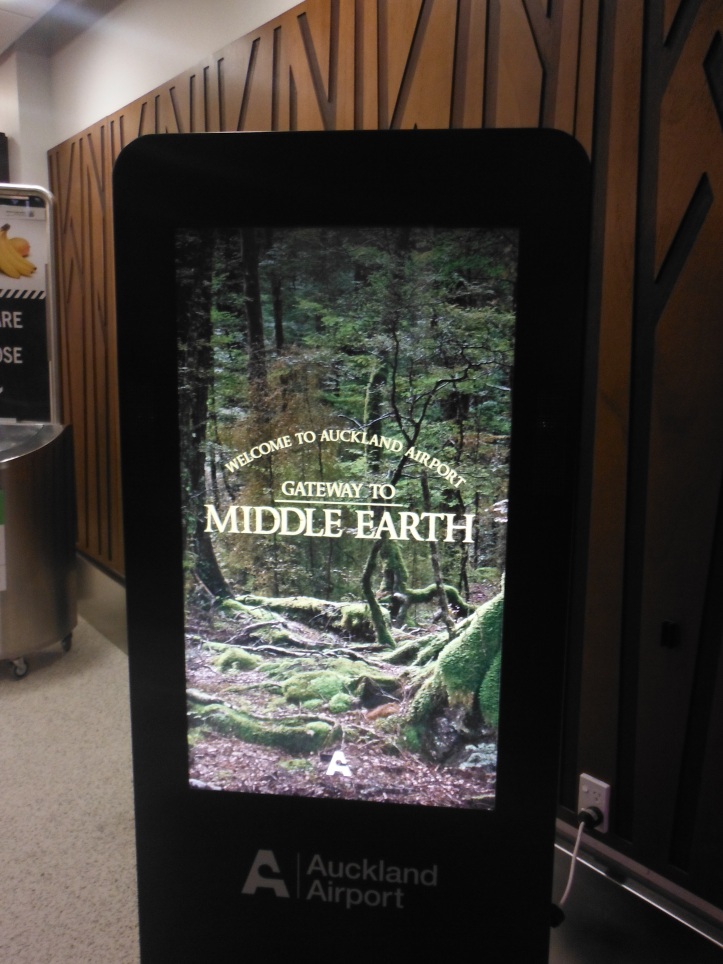 Recently I had the opportunity to head to Auckland, New Zealand for a quick work trip. Since teleportation has not been invented yet, my only realistic option was to fly there, so I figured I’d make an adventure of it. Yes there are times when the direct flight is optimal but sometimes there can be other options may offer a better experience or are just cheaper in this case it was both.

Since I was leaving from San Francisco and would need to be in Auckland for a week and then spend a week in Sydney there were a lot of decisions to make. Air New Zealand offers the only non-stop flights from the continental US to AKL either from SFO or LAX, otherwise there are a slew of options via Sydney, Hawaii or Asia. Since my itinerary would ultimately be a multi-stop journey it was going to be a bit expensive and because I like to fly I’ll be more than happy to do a detour if it saves money and doesn’t take too much extra time out of my life.

When I started shopping I found a very interesting routing via Japan then onwards to Auckland. In fact, the round trip fare was less than any one stop option via Sydney, Hawaii or even the non-stops; I know I’m not the only one that is constantly amazed at the complexity of airline pricing. I remember reading once that there can be over 25,000 pricing variables for one single flight from San Francisco to New York, how is that even possible. So it didn’t take much convincing my brain and backside that I’d be flying to Auckland via Narita Japan and off I was to book my ticket.
There was a bonus to booking this routing, the long haul flight from the US to Japan was on American Airlines and that meant the possibility of upgrading from economy to business with points. At the moment AA offers top tier members 8 EVIP coupons which translate to one class of service upgrade on flights anywhere in the world they fly on any fare class ticket. So even the cheapest ticket can be upgraded, the only caveat is space. In my case the outbound was waitlisted and the return was confirmable, yea ha. For those of you not familiar with these kinds of upgrades, most airlines let their frequent fliers upgrade their tickets, but require a certain class of ticket to do so. In the case of United you can only upgrade on certain fare classes and usually that ticket can be $500 to $1000 more than the cheapest ticket available. Then you still have to use miles or coupons to upgrade and if you can’t confirm at booking most likely you won’t get upgraded. I just can’t see any reasonable option to pay more money and hope to get upgraded, at least w/ AA you buy on the cheap, and if you don’t get bumped up at least you didn’t spend any more money then you had too. So I booked the ticket and I was set to go, now all I had to do was sweat out the outbound upgrade. My routing was the following SFO to LAX to NRT (Japan) to AKL (Auckland), with all flights on American except the AKL leg which was on Air New Zealand which I was ok settling for coach.

I know for most of you, adding that extra flight is crazy, but hey as I’ve said a million times I love to fly and these kinds of trips offer and adventure plus a lot of peace and quiet. I enjoy being home and doing the family thing, but I also enjoy time when the phone and internet are off and I just can’t be reached. With work happening at all hours of the day that ability to be unplugged if even for a few hours can be just relaxing.

Below are a few photos of the seats, meals and lounges. I must say that overall I had a great flight the staff on all sectors were amazing I really lucked out. As a one million mile flyer on United you get use to their service and seeing how the other half lives on AA was refreshing. I can’t really say anything bad about UA, but I’ve been there done that and a change of pace was just great. Different seat, different food, different amenity kit and even different entertainment options. All in all a good experience with a different carrier. 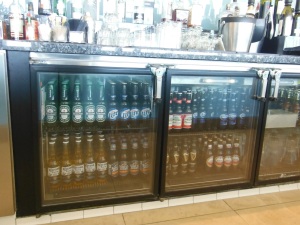 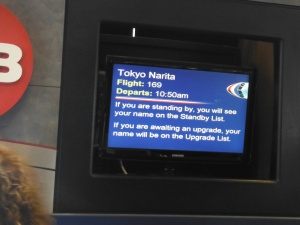 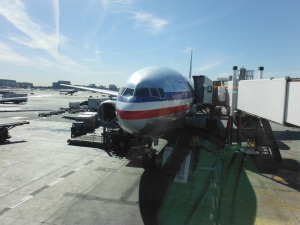 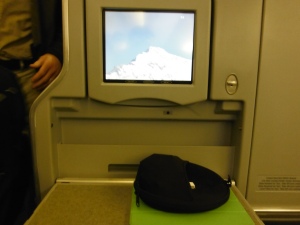 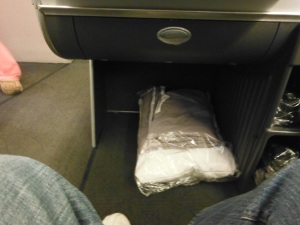 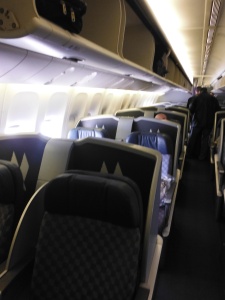 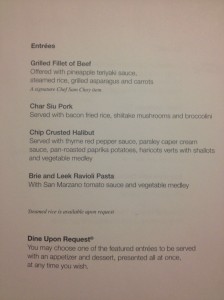 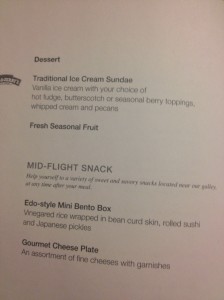 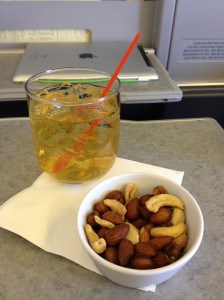 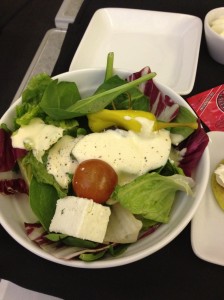 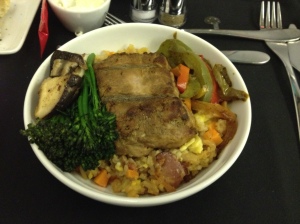 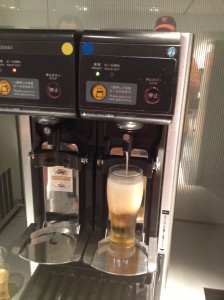 I liked the food and amenity kit. Nice products and an even better case, it’s now my power plug bag for my backpack, it’s an Eames fabric design the quintessential design team from the 50’s that even if you don’t know who they are you know their stuff. I’m not really into industrial design but these guys are amazing, so to get a bag in their fabric design is just cool, and I have a chance to use it every day, thumbs up to that.

They had nice food options see menu below, and the overall pacing was excellent, the booze selection was not too bad, were not taking Singapore Air here, but for a US product pretty darn good.

Lastly the staff was great, they made sure you had a full glass of whatever you were drinking and were just friendly. This almost over anything else can make a flight that is mediocre be great. It’s the little things that matter and personal attention and friendly people sure goes a long way.

What didn’t I like, to be honest the only turn off was the seat and entertainment. Now first off let me say that the seat is just fine over any coach seat. You have tons of room and it’s relatively comfortable. But it’s an old semi-lie flat seat. Again trust me when I say that if I had to sit in your average coach seat or this it would win 100% of the time, but when you compare this seat to what other airlines offer in business it’s just not that great. I had too much trouble getting comfortable, I could never get in a good relaxing or sleeping position. This is one spot UA has the old AA beat. My understanding is the new 777-300 AA has which they have 3 of now, has a far superior seat, but it’ll take a while for AA to catch up to UA on a premium business class seat for sleeping. Again don’t get me wrong this by no means is a bad seat, I’ll take it any day of the week, and it was just tough to find a good lounging position. As for the entertainment, it again was fine, just a little clunker then most other carriers and the screen was a bit smallish, but hey I had tons of TV and movie options so it really wasn’t that bad.

The only other gripe was the lack of power options they only offer a cigarette liter port for external power. In a 10 hour flight, that’s just ridiculous, who has a computer power plug for a cigarette lighter. Let alone a computer that can last 10 hours when in use. If you’re trying to work like I was, I only got a few hours before I had to call it a day.

As for Air New Zealand again I had a good flight. I had exit row which translated to unlimited legroom that Michael Jordan would be jealous of. The seat was fine enough, sure the AA one was hands down better, but this was just fine. The staff were super friendly made sure you had plenty to drink (read they were not shy with the booze) had ok food and the TV was full of options. I’ll let the pictures speak for themselves. 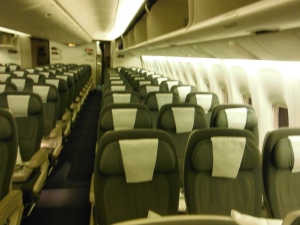 So what can I say, I had a great start to a trip to NZ. Great flights, good lounges while transiting LAX and NRT and decent food, drink and entertainment.