The weekend before Christmas the family and I spent the night in San Francisco to enjoy the Christmas festivities in the city. This was the fourth year running that we’ve done this, with another family and it’s always been a blast. Union Square with its huge tree, ice rink and all the shopping there and down at Bloomies and San Francisco center is just fun. I don’t think it’s by choice but each year we’ve tried different hotels, in the past we’ve stayed at the Fairmont and Intercontinental on Nob Hill, last year we stayed at the Intercontinental Market street and this Christmas we stayed at the Hilton Union Square. Being a loyal Hilton guy, we usually stay at them, but not in the city, because frankly they don’t have very good options. Either the locations suck or the hotel does, and with so many other mid-range options available, why stay at a not so great property when there’s so much more to choose from. Frankly I think Hilton needs to do a better job in the city like Intercontinental, Fairmont, Marriot and Hyatt do, because they are missing the boat. In fact the last time we stayed here was in 2005 for our one year anniversary, and after that trip vowed to not come back ever. Well I guess when I said we’d never come back I was wrong. I guess a really really good rate made us give it another try.

Well we were all set to stay at the Westin St. Francis, literally on Union Square, we had a decent rate and booked a Union Square view, so all was good. At the last minute the Hilton website ran an end of year promotion and slashed most of their hotels up to 50% off, so we changed hotels and booked a room there instead. It was only $80 tax included, the standard w/out the promotion was over $160, plus with my status we got breakfast for the two rooms booked. Whereas at the Westin we were paying $160 per room and we only got free breakfast for two people not four. Now I’m starting to like the Starwood brand, but they need to take a page from Hiltons book and allow free breakfast for two rooms, not one with similar status. In an expensive city like San Francisco the cost savings for the frequent traveler is pretty huge, I think the breakfast buffet was $25 per person. I know I’m not the only one that will change hotels due to price and elite benefits.

As I mentioned earlier, I’ve pretty much avoided Hiltons like the plague in SF and the Union Square property was no exception. The few times I’ve stayed there I’ve not been impressed. The lobby is fine and the service is fine, it was the rooms that made this place not so desirable. The hotel is comprised of three towers all build at different times, and I guess in my previous visits we stayed in Tower one or two and the room just seemed old, dingy and out of date. Now this time around we stayed in tower two, and even got upgraded to a junior suite now I’ll be honest the room was still dated except for the change to the TV’s from old boxes that Grandma had to HD Flat screens, but because the room was so huge, spacious and CLEAN it made for a much better experience. Since I didn’t publish any pictures let me attempt to describe the room. I would say it was about 500 SF, probably the size of two rooms. It had a king size bed with two nightstands and a 35” TV in front so you could lay in bed and watch TV. Then to the left was a large sitting area, with a three person couch, love seat another TV, a coffee table and then a computer desk and chair. Almost one whole side of the room was covered in windows, so we had great 180 degree view of the city and could even see the bay bridge, if you craned your neck far enough. Down a short hallway was the large bathroom with shower/tub. I recall the last time we stayed here the carpet was dingy and we had to move rooms two times because it was so nasty, dirty and stained. The service at the hotel was good, we had extra towels and a basinet delivered and the staff could not have been more helpful. The staff in the breakfast restaurant on the lobby level were also quite helpful. Why did my heart change about this hotel, I guess it comes down to two things, the free upgrade to a room that was over $250 to book ( I would never pay that much for this type of room) and the ultra-cheap rate for a 3 or 4 star hotel in the city. It has a good location 3 blocks from Union Square, its’ close to BART if you don’t want to drive and if you get a clean room you’re in good shape.

Conclusion: would I stay here again, if they had a cheap rate otherwise I’d go back to hotel hopping, since there are so many really great properties to choose from in the city.

I did take pictures of the room, but after reviewing them when I got home, I decided not to publish them, because I took them before we checked out and the room was super messy and they didn’t look good. Next time, I’ll be sure to get them taken before we unpack our trunks.

Particulars about the hotel:
• Hilton Union Square
333 O’Farrell St
San Francisco, CA
• On site Valet Parking $50 per night w/ in and out privileges

• Hilton Honors reward category: 7 (50,000 point per night)
• Rates usually start at $200
• Diamond Benefits:
• Free breakfast for two people per room, up to two rooms
• Free in room wireless internet
• Complimentary Upgrades when available, in this case I asked very very nicely and was obliged. I don’t usually ask I just take what they give me 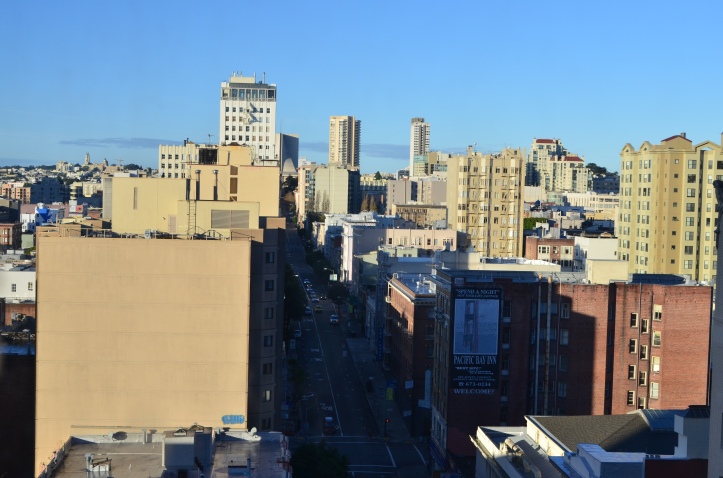