Review: Thai Airways Frankfurt-Bangkok First Class On The a380

Visiting Thailand and the island of Koh Samui

Let me just say that after an incredibly great flight on Lufthansa in First, I was looking for an equally good experience on Thai Airways. This was my second time experiencing Thai in First Class, but for both my wife and I our first time on the upper deck of an a380. So I was really looking forward to the experience. If you’re curious how I booked these tickets and how you can too, click here.

About 10 minutes prior to boarding a Thai representitve met us at the Lufthansa lounge collected our passports and said he’d be right back with our tickets, and would escort us to the gate. It turned out he hoofed it all the way to gate which is a good 10 minute walk at a brisk pace, then came back and got us and we were on our way. During our walk to the gate we had a nice chat about Thailand and about his many visits there over the years (he was German). He was also quite surprised at our routing via Frankfurt from the US. The agent was super friendly, and took us all the way to the plane before he handed us over to the flight attendants. Once we go to the gate boarding was in full swing. Because they have a separate set of stairs for the upper deck and we showed up about 10 minutes or so into boarding the scrum for Business and First on the upper deck was nonexistent. We walked up the stairs and immediately hopped on the plane, and were warmly greeted by the crew and escorted to our seats. Royal First Class has 3 rows and a total of 12 seats in a 1-2-1 configuration, and in this case the cabin was 10 of 12.

The sign at the entrance to the second deck 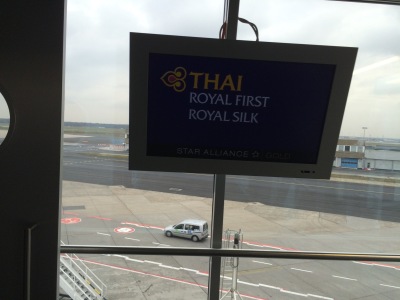 There she is “Si Racha”  a very spicy jet

Our seats and he view twords the back of the cabin

THE SEAT AND SPACE

I found the seat to be quite comfortable and pretty spacious as well. They are open but still private enough. Additionally there’s a small storage closet (I forgot to take a picture of it) with two hangers so you can store a lightweight jacket, sweater and pants. If you had anything else bulky or wide, it probably would not fit. As for other stowage, there were three small cubbies below your armrests, and you could store headphones, power cords, and iPad or even a small tablet or laptop. Also there was TONS of overhead storage. Every seat had storage above it, so there would and should never be a case of not finding a space to stow your luggage. I’ll put my designer hat on and say that they could have gotten away w/out storage in the middle sections and still had enough space to stow 12 people’s bags. But hey what do I know?

Additionally, if you weren’t traveling with someone and had a middle seat there was an automated privacy screen to block you from having to share a space with your fellow Thai a380 first class friend.

Seat controls, consisted of a removable handset  and a separate pad for seat adjustments 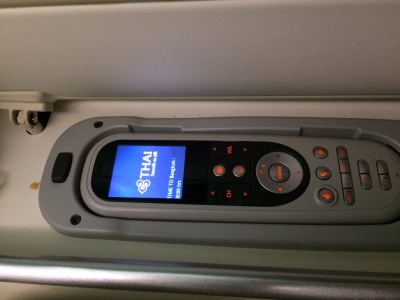 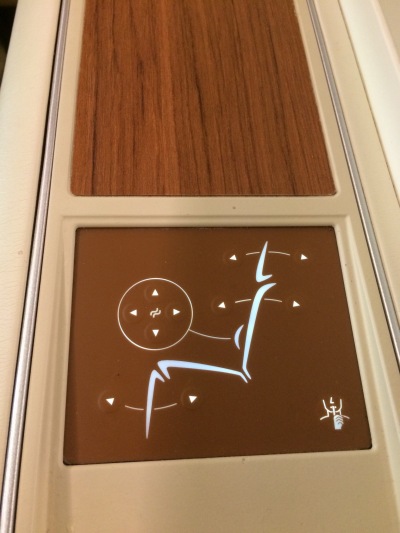 The TV (not too shabby) and the large tray table that does move front and back. Speaking of the TV and entertainment was just ok. They had about 20 English movies, and a bunch more non-English ones. I think if I had not flown to Dublin (2 weeks prior) and literally just got off a plane from Seattle, I may have been fine with the selection. But flying that many miles in such a short period of time didn’t afford me many new options that I wanted to see. I still say if you’re looking for lots of current TV and movies look at Singapore, Cathay, United (on a newer plane w/in-seat AVOD) or Emirates. They all have superior selections. I ended up watching Maze Runner and Catching Fire, and that’s four hours I’ll never get back. 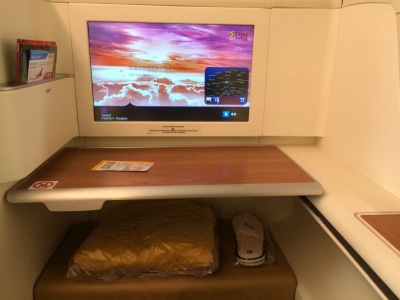 Headphones, not sure they were Bose or not.

The PJ’s were a very light blue with full button front on the ops and half sleeve. My dark skin in the was not great they were kind of see through

I miss the thicker grey ones from last year. Also as for size as I’ve said before I’m a bit husky so the XL’s had to do and luckily the bottoms fit and so did the tops if I wanted to participate in a wet t-shirt contest. Which let me just put out there no one wants to see, not even me.

Lufthansa take a page from Thai and show us what you’ve got!!

The bathroom was huge. A separate space for changing and for doing your make-up,

and a different spot for doing your business.

Apparently Thai is not proud of their drink and spirit selection,

all they show is the variety. After the flight attendant couldn’t tell me what the Scotch was

I just stopped asking. Bottom of the barrel stuff I guess. They must spend it all on the Dom P.

The food was nothing inspired, but at least the Thai selection was good. Online they have over 17 different meals you can choose form and that’s before you look at dietary or religious options. So to only see three choices and none too inspiring was disappointing. My only gripe was that they had two breakfast options, and when we ordered all our meals at once, we we’re told that they only had one more breakfast crepe. And either we could share or one of us cold get the egg dish. I know this is grasping at straws here, but you don’t run out of food in first class. Besides, how did they choose us to shaft? There were 8 others on the plane, don’t they know who I am? 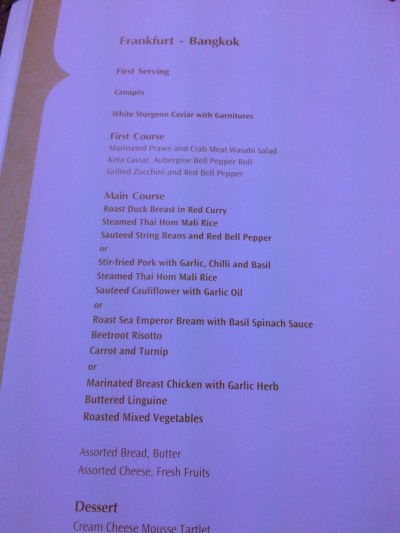 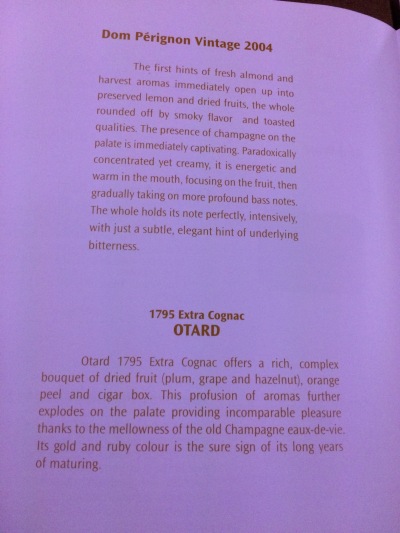 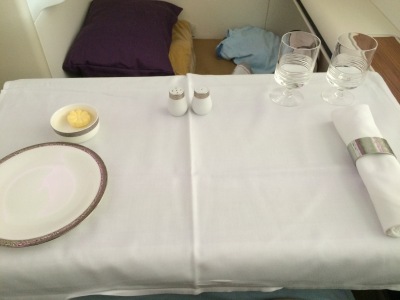 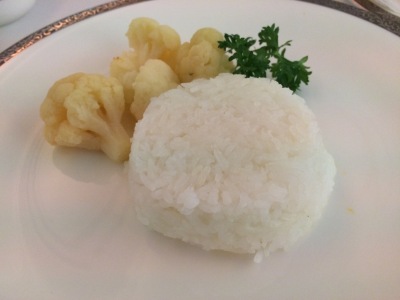 So the biggest problem I faced on this trip was the food. I’m what you’d call a healthy eater. And I don’t mean I eat healthy food, I mean I like to eat. Now I have been know to turn down a meal, but that was when George Bush the First was President…But between two decent meals in 10 hours on Lufthansa, grazing at the lounge in Frankfurt for 2 of the 4 hours we were there, the rest of the time I had a drink in my hand. And then finally the prospect of a  second big meal in 11 hours again just made me nauseous. I did my best to say “no”, but in all honestly it was like I was offending them. I said I’d only have the fruit and tea, but somehow ended up getting served all of this for breakfast.

Somewhere during the flight I got tired. You’d think after working in Portland on Thursday night, getting home at 1:30 AM Friday morning, finishing packing and leaving the house at 6 AM, so we could drop off our kid. Then flying to Seattle, hopping on a 1o hour flight to Frankfurt with a four hour connection, it wouldn’t have taken this long, buy I finally called it a day and went to bed.  Frankly I’m just tired writing that paragraph. So I gladly took up the staffs request to trun down my bed. They pulled out  duvet, and covers and a full size pillow and I was set Not bad for a fully lie-flat bed and a TV to pass the time. Oh yeah it was pretty darn comfortable too.

Sadly the most useless use of space ever. The First Class lounge in front of the seats and behind a curtain that also separated the seats from the one and only bathroom. This area could be so much cooler. Three seats and nothing to do. Emirates forgoes the front of plane lounge on the upper deck, and has showers as well as a very well stocked bar in the back. Korean Air also has a bar and Duty Free. This just ended up being unused space or a waiting area for the bathroom. Oh they did have snacks (water, chips and chocolate). 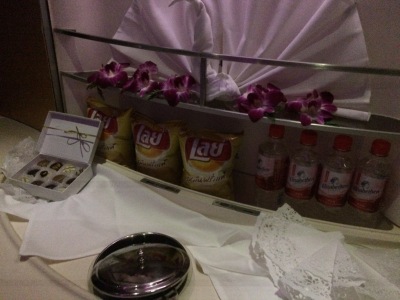 I enjoyed the space and the upper deck as well as having a try at the a380 in First. That was just great, the service was also pretty good not great. I think the language barrier had a lot to do with that. Hey I can’t speak Thai, so I don’t fault anyone, but it was hard to get my message across a few times, and I know they were trying just as hard as I was to understand each other. But that being said they were all so friendly and were dong their best to make us happy. I also think that if they want to truly offer a  world class first class product they need to offer more inspired and varied food choices as well as a better spirit selection. To have the menu say Scotch, Rum, Gin or Vodka, makes me think I’m flying United or American and not Thai. I guess what I’m trying to say is that this showed me that my love for Singapore and Cathay Pacific Airlines is no joke, they truly take in-flight service to another level.